This guide will help you use PART to conduct your experiments. Everything you will need to know to get started using PART will be covered in the following six sections:

Section One: Introduction to PART

A full introduction to PART can be found here: http://bgc.ucr.edu/games/part/

PART is designed to present one or more customizable “Assessments” arranged in a customizable “Battery”. A set of prepared default assessments and batteries included in the application. These default sets cannot be altered, but modified versions can be saved with new names and new sets of parameters and batteries can be created and saved. Data are saved to the iPad and are not transmitted to any other location. To access the saved data, iTunes or other software can be used to share the files for custom assessments and batteries as well as logs of user data. Calibration of PART (see Section Two) can be easily conducted using external equipment capable of measuring the precise output of the iPad (i.e., a sound level meter and flat plate coupler).

Complete details on the use of the application are continually being updated and are routinely made available through the iPad Psychophysics Users Group (iPUG). Interested users should email fgallun@gmail.com to be added to the group.

PART is continually being upgraded and at this time includes assessment tools that can be used to measure the following abilities:

At this time, only a single default Battery is included (‘Listen Battery v2’), which presents limited instructions and examples and includes three of the assessments described above: Binaural Frequency Modulation Detection, Temporal Envelope Gap Discrimination, and Spectrotemporal Modulation Detection. For references related to the assessments provided, see the references in Section Six.

A recent modification to reduce the download time is that the CRM sentences and TEN maskers have been removed from the app and are now available as optional downloads. Unless you know you won’t need them, downloading them is recommended to avoid errors with batteries that need them. The best practice is, immediately after installing PART, to go to the Modules screen and download all optional modules. A screenshot of where the Modules tab can be found on the Settings screen is shown below. To get to the settings screen, tap the Settings button on the main screen, shown in Figure 1a. 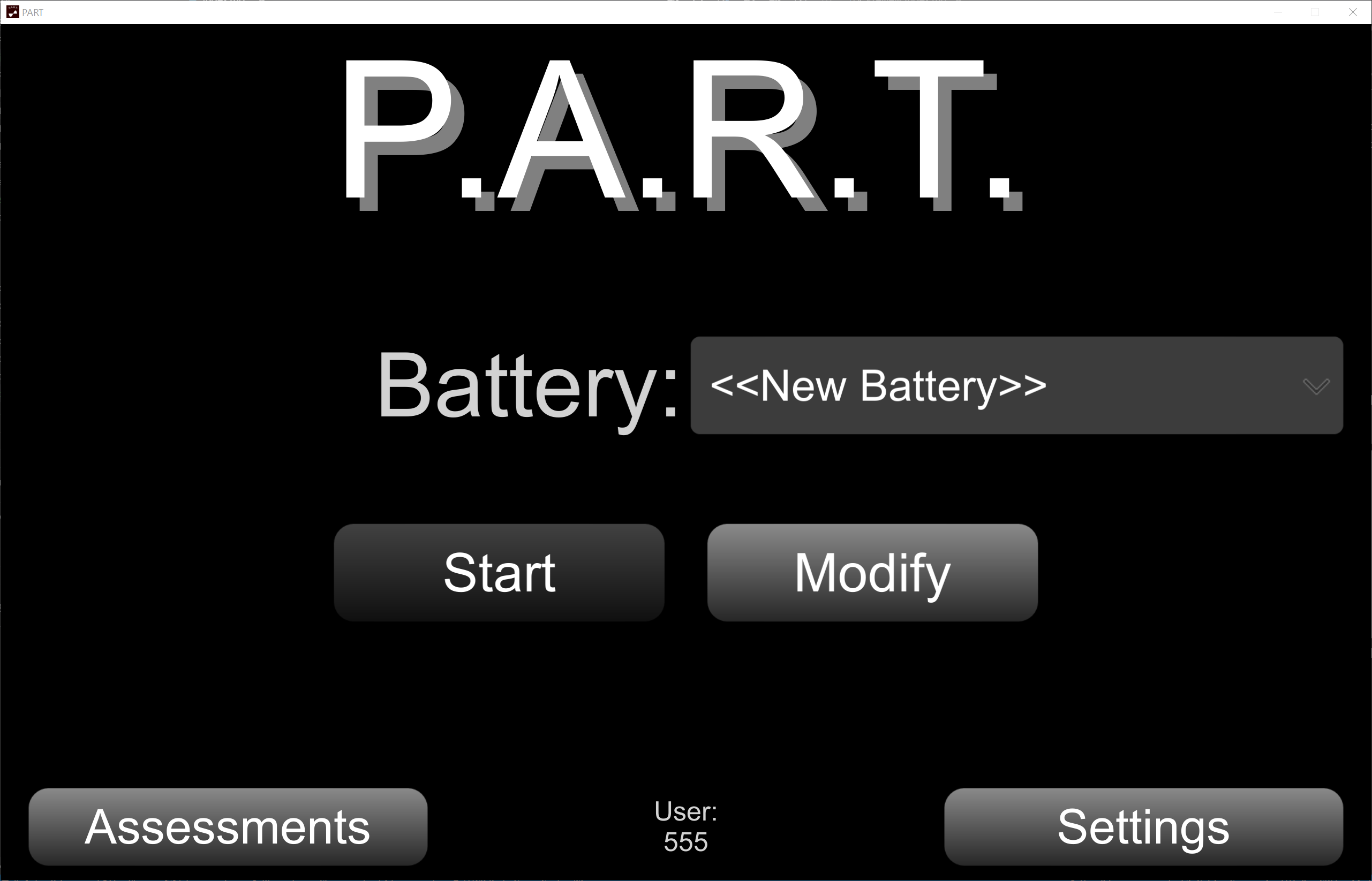 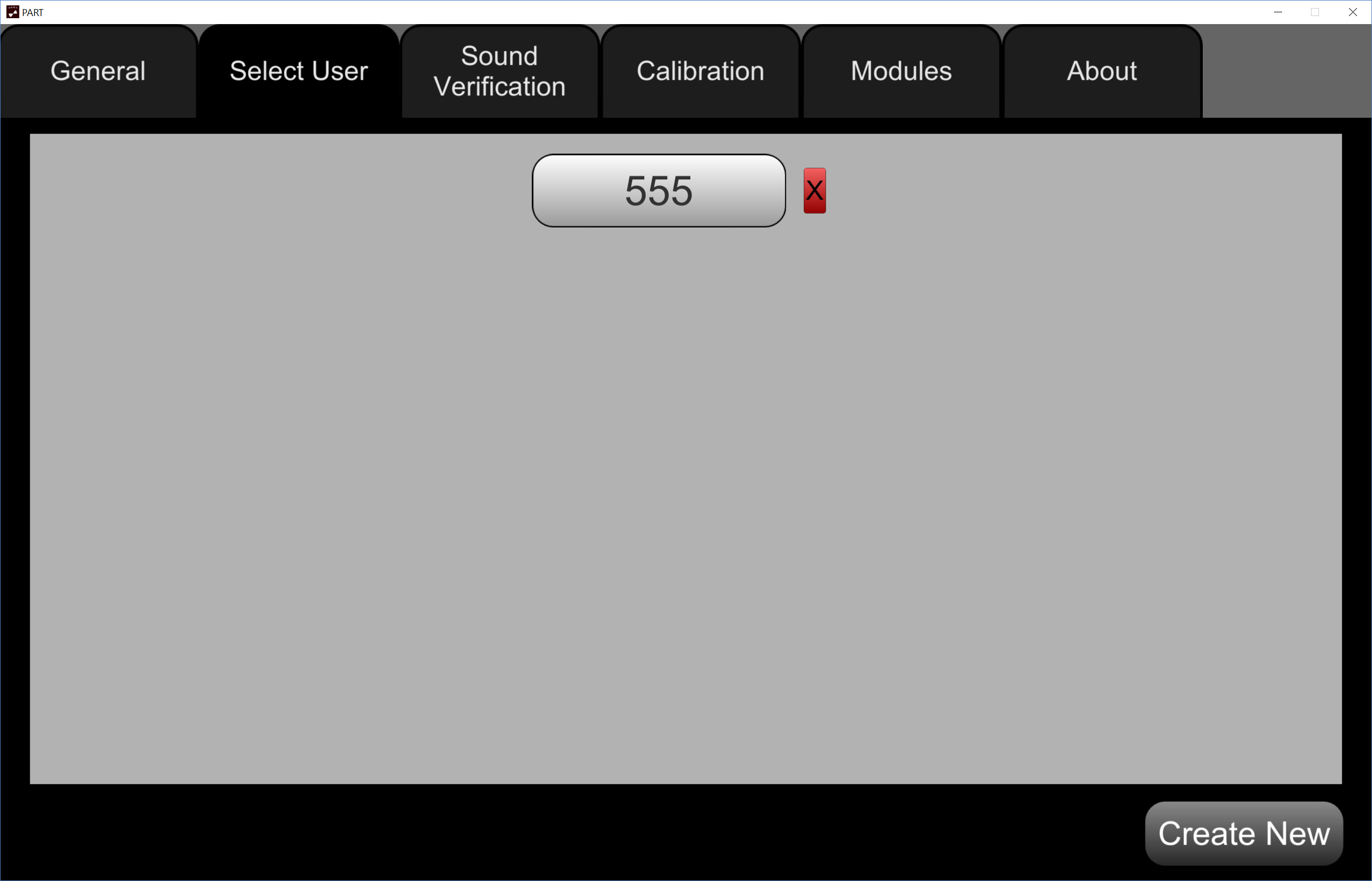 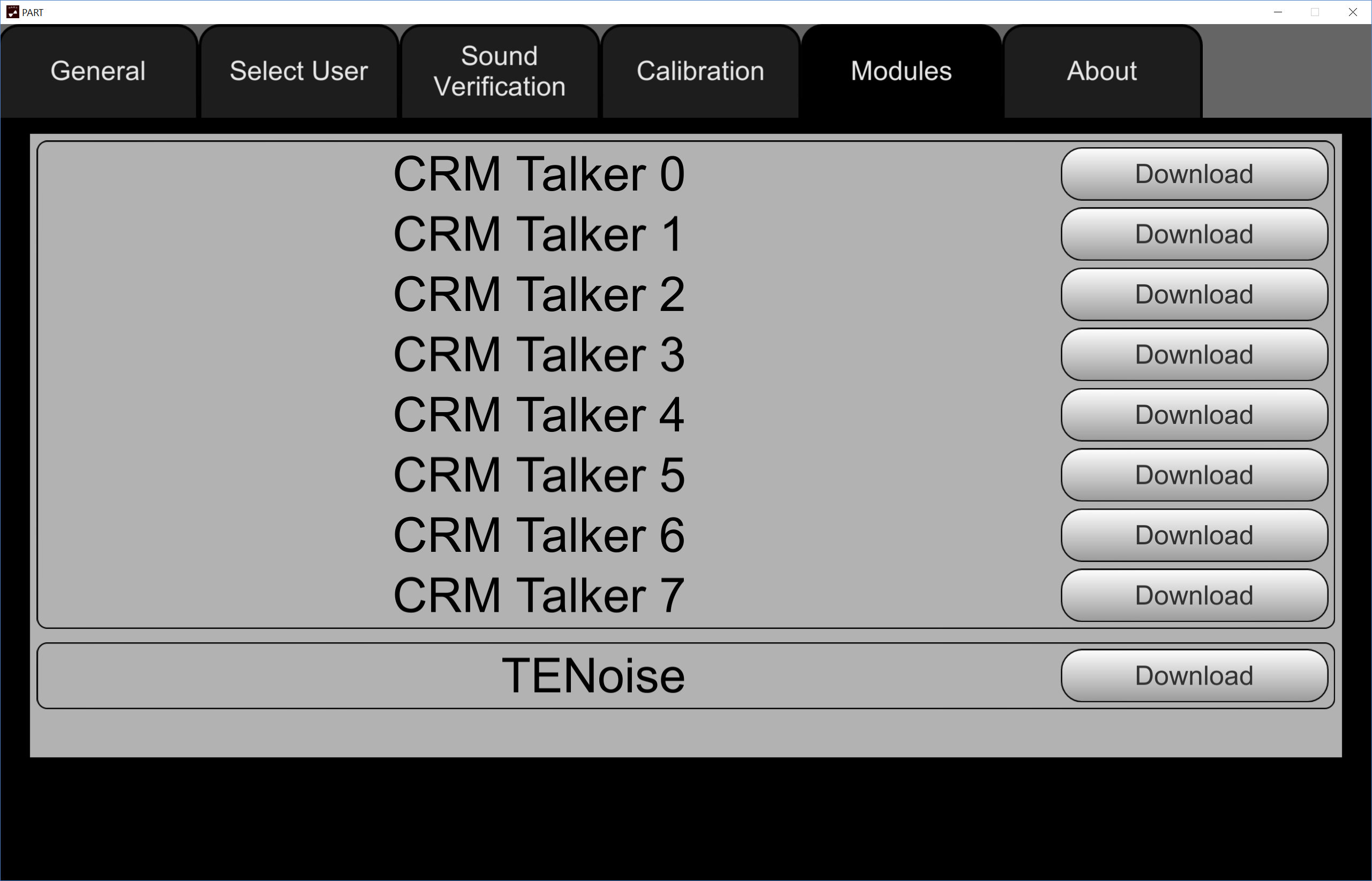 Calibration is a crucial step in the use of PART. The goal of the calibration is to ensure that the sound levels output are consistent with the decibel (dB) values shown in the app and recorded in the log files. The general method involves playing a calibration signal (usually a 1000 Hz tone) at a known internal root mean square (RMS) level and measuring the level of that tone at the output of the transducer chain (this will usually be the headphones you will use for testing, plugged into the auxiliary jack of the iPad or iPhone). The application then provides the ability to input the dB level measured, using a calibrated system (usually a sound level meter). PART then adjusts the internal scaling so that signals of that internal RMS are associated with the measured dB level rather than the default value. Verification of this adjustment can then be made through the app. When the measured level is the same as the nominal level, the system is defined to be “calibrated”. Below are detailed instructions specific to PART. 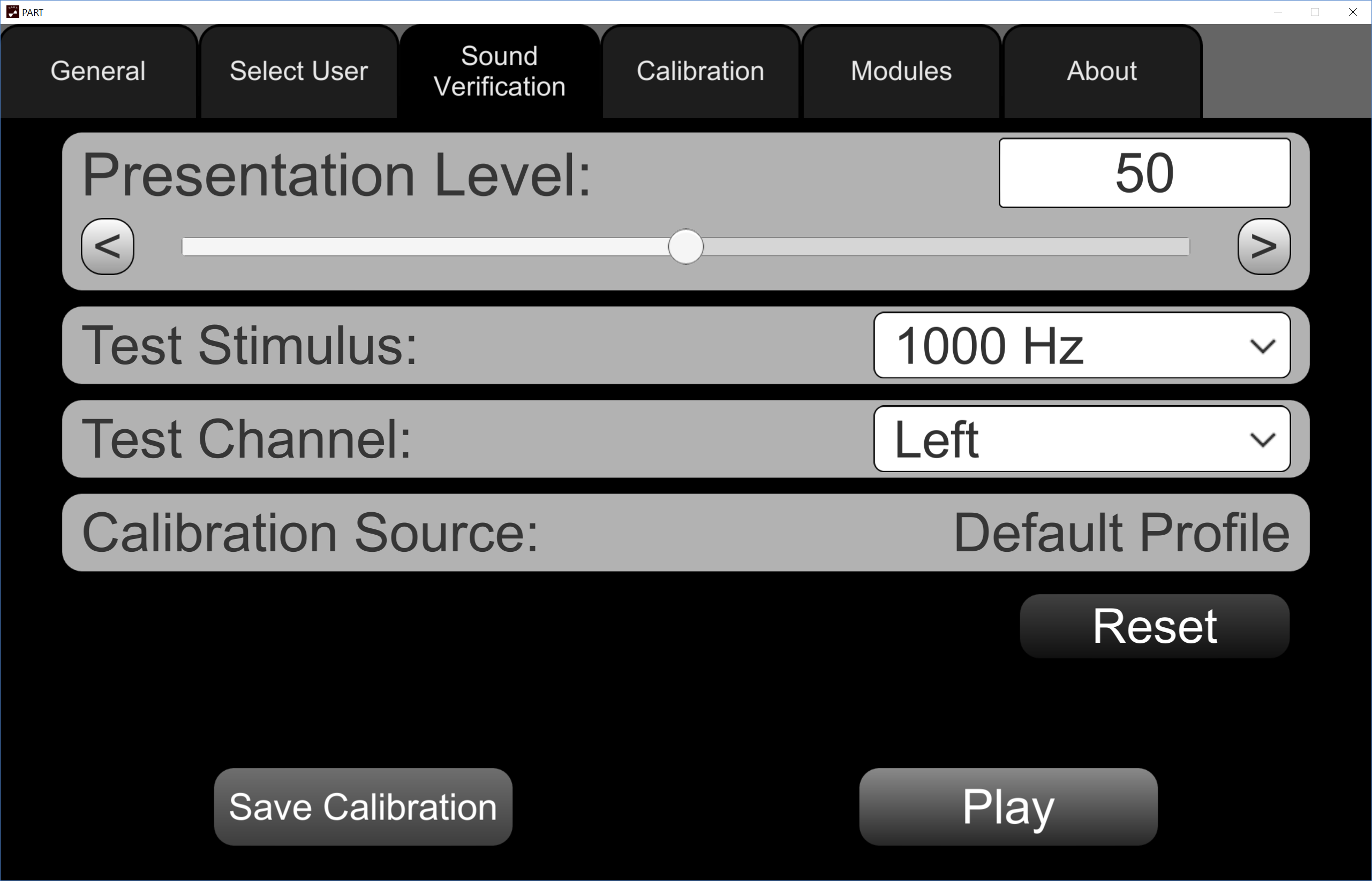 Assembling the calibration hardware involves plugging transducers into the device and placing a microphone in the proper orientation to record the output signal. The microphone should be attached to a sound level meter (SLM). For laboratories with professional SLM equipment, follow the laboratory protocol. We have found that in general, a new iPad with new HD 280Pro headphones measures about 5 dB lower on the SLM than the intended output.

If calibration cannot be conducted routinely using laboratory equipment, we have verified that an iBoundary microphone attached to an iPad running the NIOSH SLM app can provide the appropriate calibration. Note, however, that the NIOSH SLM needs to first be calibrated in the laboratory with the external microphone attached, so this may only be of use for field calibration or spot checking. Figure 3 shows this setup.

To verify the calibration, select a range of Presentation Levels and Test Channels and tap the Play button. The measured sound should match the Presentation Level. If this occurs, the system is calibrated. If not, repeat Step 3. To begin testing, choose the Select User tab and select a user, which will reveal the main menu (Figure 1a).

A folder has been uploaded to Dropbox that contains the Custom Assessments and Custom Batteries that we are testing, so you can add them to PART and try them out. You will need to download new “Custom Battery” and “Custom Assessment” files from this Dropbox folder and copy them onto the iPad using a program such as iExplorer.

Start by downloading and installing the iExplorer 3.9.11 application on your Mac or Windows computer. Then double-click the icon to open iExplorer.

When you open iExplorer, be sure to click the “Continue in Demo Mode” button.

Go into the Documents folder and add them to the Custom folders you’ll find there (Figure 6).

Creating and Modifying Assessments and Batteries within PART

You can also just go into PART and modify an existing battery or create a new battery.

To create a new Battery

Tap the pulldown menu on the Menu screen and select <<New Battery>>, then tap the Modify Button. This will take you to the Customize Battery screen. Figure 7 shows this for an existing battery.

Choose Assessments from the “Available Assessments” list and use the < and > arrows to move them in and out of the Batteries. The ^ and v buttons can be used to change where they occur in the list. The + button adds one of five different special types: Instruction screen, Input values screen, Variable Modifier Stage, Break, and Report Screen. To see how each is used, choose an existing battery, tap the “Modify” button, choose a Battery stage (it will highlight when you tap it), and choose “Edit” to see how it can be set up.

To modify an existing Battery

Batteries consist of multiple stages, some of which are “Assessments”. Editing an existing assessment will change it for all batteries in which it is included, so it is best to save it with a new name if you intend to use the original as well.

To modify an existing Assessment

Figure 7 below illustrates an example of modifying an assessment.

Section Four: Programming Your Own Assessments and Batteries

This PART of the instructions still in progress. The section on modifying assessments and batteries is a good place to start for now. Please contact fgallun@gmail.com with specific questions in the meantime.

You may choose whether or not to display data on the screen following a test battery (see Section Three on modifying batteries). Regardless, each time a battery is run, a set of log files and a summary file will be generated and saved on the iPad. There is currently no way to view the log files on the iPad itself. The instructions below describe how to move the log files from the iPad to a computer for viewing and further analysis.

In order to move data from the iPad apps to your computer, we suggest using iExplorer 3.9.11 (do NOT use iExplorer version 4 as it does not allow you to export the files from the folders).

iExplorer 3.9.11 can be found and downloaded online and can be run in demo mode, so there is no need to buy a license. There is also a copy available on Dropbox: http://tiny.cc/PART

As illustrated below in Figure 8, you will see a series of options on the left side of the window, one of which is “Apps”. Click this to view the apps that have data saved on the iPad, and then click on PART. Click “Documents” to reveal the “Logs” folder, where all the data are saved in folders with the Subject ID you entered when you ran the battery as the name of the folder. In the example below, we put in “OHSU” as the Subject ID.

Right click on the entire Log file on the left side of the screen or on the individual text files you wish to copy and hit Export.

We have had less success using iTunes, but it does allow the Logs to be exported, as shown below in Figure 10.

Whiteford, K.L., Kreft, H.A., and Oxenham, A.J. “Assessing the Role of Place and Timing Cues in Coding Frequency and Amplitude Modulation as a Function of Age.” Journal of the Association for Research in Otolaryngology 18, no. 4 (2017): 619-633.

Eddins, D.A., and Bero, E.M. “Spectral modulation detection as a function of modulation frequency, carrier bandwidth, and carrier frequency region.” The Journal of the Acoustical Society of America 121, no. 1 (2007): 363-372.

This work was supported by NIH/NIDCD R01 0015051. The application represents the individual work of the authors and creators and should in no way be considered to be approved by or represent official policy of the United States Government.